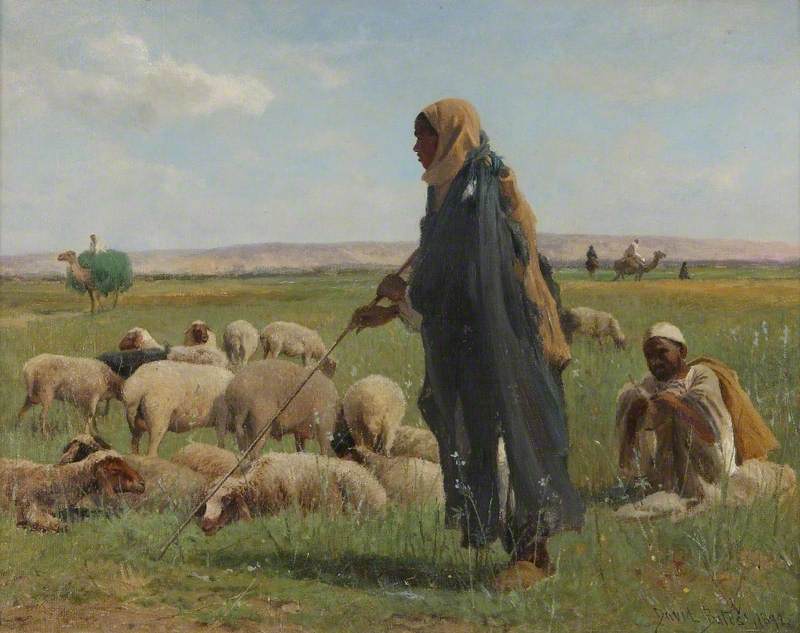 As I was thinking over Psalm 23 today, I noticed two things which I never had before pertaining to its form, flow, and characteristics that I think are worth sharing. Before commenting, I will share the ESV’s translation here for reference:

1 The Lord is my shepherd; I shall not want.
2 He makes me lie down in green pastures.
He leads me beside still waters.
3 He restores my soul.
He leads me in paths of righteousness
for his name’s sake.

4 Even though I walk through the valley of the shadow of death,
I will fear no evil,
for you are with me;
your rod and your staff,
they comfort me.

5  You prepare a table before me
in the presence of my enemies;
you anoint my head with oil;
my cup overflows.
6  Surely goodness and mercy shall follow me
all the days of my life,
and I shall dwell in the house of the Lord
forever.

The reason I separated verses 4 and 5 instead of lumping them together as a single segment of direct address is explained by and leads into my second observation.

I will briefly expand on the significance of these observations with a few notes here.

When we come to verse 5 we see the theme of God’s presence and provision persist, but the imagery noticeably switches to that of tables, cups, and anointing (more human and often indoor imagery). I think that these images proleptically look forward (in verse 6) to a new setting for dwelling: inside Yahweh’s house. What do you do inside a house? Eat, drink, and cleanse/anoint the body. The direct address then drops off again after verse 5, and in verse 6 reverts to the kind of indirect confession that the Psalm began with.

While in verse 2 the sheep dwells outdoors in green pastures, the psalmist in verse 6 now dwells inside a house. The mention of dwelling in verse 6 I believe mirrors a similar picture of “dwelling” (lying down and being beside) used earlier, where it is the psalmist in pastures (with still waters) that was in view there. Even if the terminology in verse 2 is more descriptive (as poetry is wont to do) of “dwelling” rather than actually using the word, I believe it still describes the same essential reality of abiding in God’s presence wherever it may be (in pastures or in a sacred house) and the blessings that attend that abiding.

There is possibly another kind of parallelism between the ideas of being beside still waters (if this signifies a source of quenching thirst) and the indoor imagery of the cup overflowing, although that association is less certain and structurally linked.

One of the most interesting parts of the above observations though is the function of the “bridge” verses of 4–5 in that they turn directly to Yahweh and also serve as the transition point of the metaphors employed. I think if we notice that convergence point through direct confession it helps us conceptually and thematically tie the whole Psalm together, even though the imagery changes.

If you remove the English word “will” (signifying future action) from most common translations of Psalm 23 in two places then you can see the more immediate effect of the indirect confessions:

So much to meditate on in Psalm 23!

Ridderbos on the Gospel as rooted in History