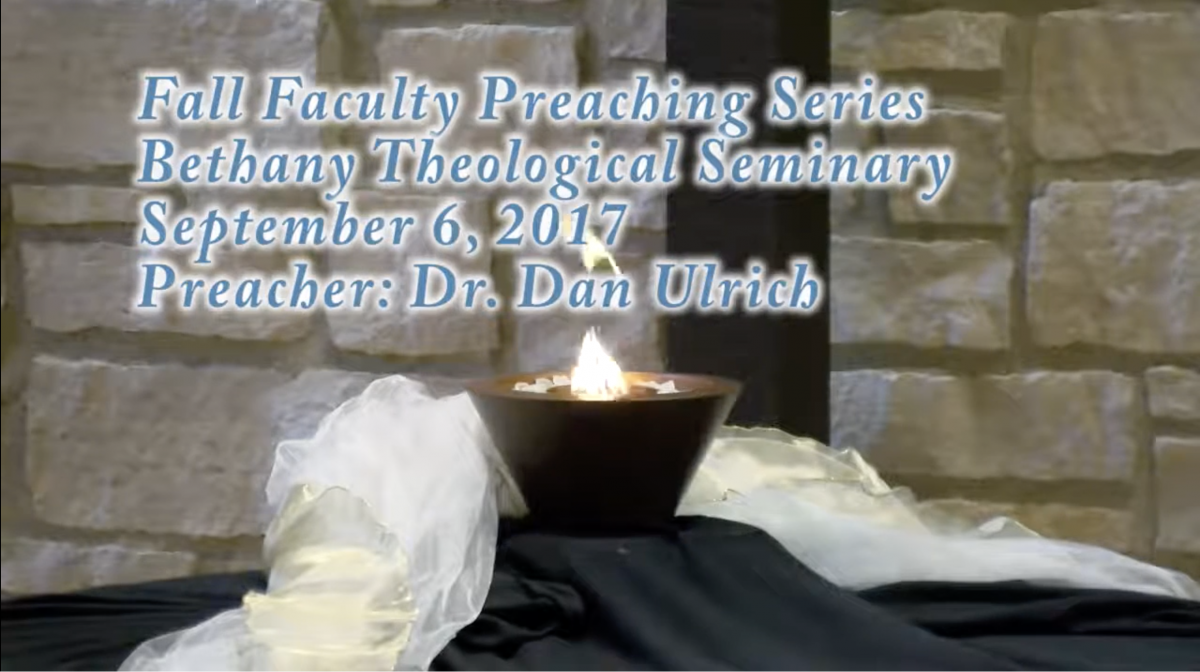 What Has The Kingdom Of God To Do With Repentance?

Today I ran across a captivating chapel message delivered by Dr. Dan Ulrich, Wieand Professor of New Testament Studies at Bethany Theological Seminary.* It is on some interrelated topics that I have long contemplated and written on, yet focuses on a specific text that I had not considered in all its aspects as a nexus for examining them. Namely, the message that the proclamation of the good news of the kingdom of God was habitually announced alongside a call to repentance, as well as attended by Jesus’ miraculous ministry and demand for justice. Highlighting this aspect of repentance, Jesus called for it so regularly in his ministry that ‘repent’ need not even be mentioned in the text each time for us to be sure that he often did so when he proclaimed the kingdom; because it was how he invited people to participate in it.

Grant Osborne notes, speaking of a particular instance in the Gospel of Matthew in which a proclamation of the kingdom lacked the word ‘repent’ along with it: “Schlatter… explains well the reason why Matthew has omitted ‘repent’; on the basis of the other two passages, he expects the reader to know that repentance is part of the message“1 (emphasis mine). To be sure, Jesus made it clear that to enter the kingdom of God (Mark 10:23) one must follow him (10:21), and that very action is the prime example of repentance by doing what God desires in surrendering self-pursuit and negative worldly attachments in exchange for the imitation (“following”) of Christ.

If one were to draw a graphical representation of the things which the kingdom of God is associated with in the Gospels and Acts — with the term ‘kingdom’ at the center and the others surrounding it, attaching radially to it as the hub — there would be a rich array of such neighboring attachments. Among them would be: following and confessing Jesus the Christ; forsaking perishable attachments to obtain lasting reward; performing miracles of healing and exorcisms; following kingdom justice and law (contrasted to lawlessness, as in the Sermon on the Mount); inheriting eternal life and salvation; suffering in the world; and repentance.

Since these all attended Jesus’ proclamation of the kingdom, and we see them each more than once in the Gospels, we can be confident that they all occurred with regularity throughout Jesus’ consistent declaration of that gospel — the good news of the kingdom. Yet if we were to take only some small portion of those things and cast off even one we would have a deficient understanding of the kingdom. In the following sermon, repentance is brought to the fore to consider its relationship to the kingdom of God in a text from the Gospel of Matthew.

Jesus wants people to experience the good news of the kingdom of God as truly good for them: for their benefit. But it is not automatically so upon simply hearing it. We see that even in the temporal kingdom healings, which indisputably demonstrate Jesus bringing the kingdom of God to displace the demonic realm in his exorcisms and make people whole: the people who are benefitted by such clear kingdom miracles may yet fail to ultimately enter the kingdom to inherit its benefits. The benefit is not permanent in that case. So will it happen if they leave off one very important and even pronounced thing in Jesus’ message: Repentance. But what is repentance and how should we understand it?

With that I will let Dr. Ulrich’s words do most of the rest in speaking to this subject, which was drawn with an eventual application to contemporaneous events telling of the injustice of racism and partiality and the danger of not repenting of injustice:

“Then some of the Pharisees and teachers of the law said to him, “Teacher, we want to see a sign from you.”

43 “When an impure spirit comes out of a person, it goes through arid places seeking rest and does not find it. 44 Then it says, ‘I will return to the house I left.’ When it arrives, it finds the house unoccupied, swept clean and put in order. 45 Then it goes and takes with it seven other spirits more wicked than itself, and they go in and live there. And the final condition of that person is worse than the first. That is how it will be with this wicked generation.”

“This is a sermon where I feel challenged, and feel called to challenge us. And in the process of feeling challenged I felt led to a text that has bothered me for a long time. This is a text that does not appear in any current lectionary, no student in my exegesis course has ever chosen to focus on it for a semester, … yet here it is in the midst of Matthew passionately warning us about the danger of failing to repent.

This warning comes in the midst of a sharp conflict in Matthew’s story. Jesus is in conflict with the leaders of his people. In fact, they’re already plotting to kill him according to Matthew 12:14 — even before the Pharisees ask him for a sign. Jesus has been challenging their authority by emphasizing mercy over sacrifice by healing on the Sabbath, by forgiving people they think should not be forgiven. He’s creating enemies with his stand for God’s reign and its justice.

And he’s in conflict with not only the leaders of his people, but with the crowds. They have flocked to him for healing, they’ve had their demons removed, but they haven’t done what he most wants. His message is: Repent, for the reign of heaven is at hand! That’s why he’s healing, to demonstrate in visible form the reign of God. He has mercy and that mercy is the heart of God’s reign, the foundation of justice; but it takes repentance to live in that mercy and in that justice. And he’s not seeing it among the crowds — that’s why he warns them earlier in chapter 11… Repent and turn away from evil! Turn toward the good! Repent and seek the justice of God’s reign!

We often translate dikaiosunē (δικαιοσύνη) as “righteousness” but it’s not just an internal quality of moral goodness, much less a ‘holier than thou’ attitude. Righteousness means justice: it has social dimensions, it has to do with the way we live in society, the way we treat one another. Do all people receive equal opportunities? Are all people valued, as God values each one of us? This is justice. This is a heart of the reign of God — what we are called to seek above all else because we are followers of Jesus the Messiah.

Jesus’ warning continues with a parable about a relapse. Someone has been cured of demonic possession; liberated from an unclean spirit that dominated that person’s life. And that’s a good thing — but sadly it’s not permanent. The demon seeks to return and comes back and finds that person like an empty house: all clean and swept — like my office occasionally gets — but like my office it’s not permanent. The mess comes back. The demon comes back seven times worse, and the consequences are tragic.

While I stop my highlight of the message here, I encourage listening to the remainder of Dr. Ulrich’s sermon in the video below for all the contemporary application he gives in showing how repentance is not simply turning away from evil but is turning toward good in doing what is just in how we conduct our lives and treat others.

May we always remember that if we wish to live in God’s Kingdom we must live a life characterized by repentance. A repentance that is not some mere private and internal moral disposition and conviction, but a repentance that lives out the radical commitment to living according to God’s just reign.

Of course, when we relate this to the rest of Scripture this does not detract in any way from the need and promise of being reborn by God by his grace for those who have faith in Jesus. Yet we see, as Dr. Ulrich highlights in speaking of mercy (which is grace), that “mercy is the heart of God’s reign, the foundation of justice”. Paul even says of God’s kindness (which describes the disposition of his grace): “God’s kindness is meant to lead you to repentance” (Romans 2:4). God is proactive in bringing that mercy and grace to people who did not deserve it, but the question is whether they will receive and live in light of that mercy and grace. And who is a greater model for mercy and justice than Christ, who is perfectly merciful and perfectly just?

*I am not affiliated with Bethany Theological Seminary or its associated denomination in any way. I simply discovered this message online while browsing.

What Is Your Story In Light Of The Story Of God?